We all cross our fingers on kayak tours hoping to encounter whales on the water. While whale sightings from a kayak are certainly spectacular, they are not the only wildlife we get to see while paddling the west side of San Juan Island. Often under-appreciated, some of the birds we see are equally impressive for diverse reasons. What follows is an abbreviated list of some of our common birds and their surprising abilities and behaviors: 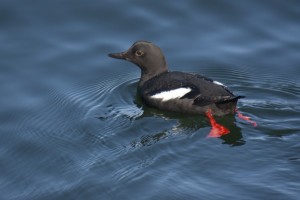 The Pigeon Guillemot is penguin-like in structure, and 11.8-13.8 inches long. On our tours we frequently encounter these black and white birds floating on the water near their nests, which are located on vertical cliff faces. To scale cliffs they use the claws on their feet plus a fair amount of wing flapping. Their bright red webbed feet and white wing patch are very distinct. In flight, these birds flap their wings furiously, and their water landings are anything but graceful. Whatever abilities they lack in flight and landing, however, they more than make up for in their underwater movements. Pigeon guillemots are incredibly accomplished divers. While they fish most often between depths of 33 and 66 feet, they have been known to dive deeper than 148 feet! Unlike most members of the auk and puffin family, pigeon guillemots usually lay two instead of one egg. 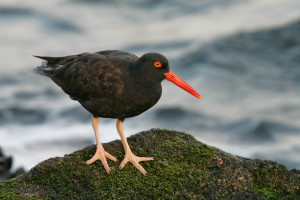 These birds are most often seen in flight or along the rocky intertidal shoreline. With their rapid piercing whistle call, they are usually heard before they are seen. 16.5 to 18.5 inches long, these fairly large shorebirds are solid black with a distinct large red-orange beak. On our paddles, people frequently relate them to “crows smoking carrots.” Despite their name, the oystercatcher eats primarily mollusks. They are especially fond of mussels and limpets. Black oystercatchers can live for over 15 years and are permanent residents of their breeding range, migrating very short distances if at all. While they are not diving birds,

Along the west side of San Juan Island, we most often see these birds perched on the edge of cliffs or overhanging branches. Like the black oystercatcher, we usually hear the belted kingfisher before we see them. They have distinct rattling calls that are impossible to mistake. Their top-heavy structure makes them perfectly suited to diving. Their primary food source is fish, which that catch by diving either directly from their shoreline perch or from a hover over the water. The belted kingfisher is one of the very few bird species in which the female is more brightly colored than the male. The female sports both a blue and chestnut band across their chest while the male only has the blue band. Young belted kingfishers have acidic stomachs, which help them digest bones, fish scales, and arthropod shells. As they age their stomach chemistry changes and they begin regurgitating pellets of undigestible material.

Questions or comments? Phone us at or send an email to [email protected]. You can also visit our contact page and submit an inquiry via our contact form.